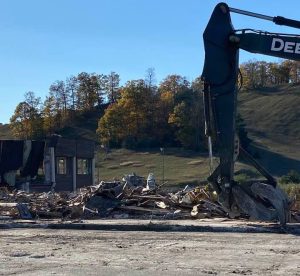 Sugar Loaf Ski Resort, located in Leelanau County, Michigan, was recently demolished. The vacant resort had been abandoned for 20 years before being torn down on Wednesday.

The once booming Sugar Loaf Ski Resort originally opened in 1947. Sugar Loaf Ski Resort was home to a ski school, golf course, recreational room, lodge, and hotel. The resort attracted anywhere from 3,000 to 4,000 skiers a day with the hotel, condominiums, and lodge typically filled to capacity. Not only that, but the resort was the largest employer in Leelanau county. 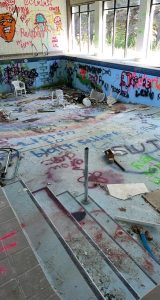 Inside of Sugar Loaf’s hotel. PC: Samantha Lucha via Facebook

Sugar loaf faced several years of inadequate management before shutting down, according to USA Today. Eventually, the resort closed its doors in 2000 and had been vacant since. Over a decade later, Jeff Katofsky of Sweet Bread LLC, purchased the property in 2016. At that point, the property had been decaying for years. Still, Katofsky restored the community’s faith and promised that “the beloved ski resort would thrive once more as a four-star resort that would create 250 year-round jobs.” Katofsky planned to invest $134 million into his new resort and hoped to begin demolition in June of 2020. Unfortunately, the demolition got delayed, which Katofsky blamed on the pandemic. Finally, in December of 2020, real estate advisor Ross Satterwhite announced the resort had been sold to SPV 45 LLC. Satterwhite has stated that the new owners have no affiliation with former owner Jeff Katofsky.

Although one would assume the demolition to be sorrowful for nearby citizens, it was actually the opposite. As stated by Traverse City Record Eagle, Marilyn Bordeaux, a resident of a condominium on the property, described the resort as a “horrendous eyesore.” The resort reportedly had broken windows, caved-in roofs, and was a hotspot for vandalism. “The township is extremely happy that the buildings are coming down and will no longer be a health and safety hazard,” states Tim Stein, the Cleveland Township Supervisor. Residents like Bordeaux were satisfied with the destruction of the moldering resort, but are concerned with the future of the lot. Bordeaux claims that “she doesn’t want to see something like a big amusement park.” Bordeaux states that the new owners seem conscientious and she hopes that they care about the people, the land, and the peninsula.

After several years of various ownerships and management, Sugar Loaf Ski Resort’s legacy is nothing more than failed project for many aspiring entrepreneurs. 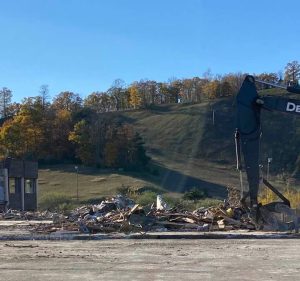 The demolition of Sugar Loaf with its ski hill in the background. PC: Karl Dyksterhouse via Facebook