An Impressive First Descent in the Monashees

Often the question is who and when. The last time I ski toured under this line I looked up and I knew that it was not a line I would ever ski. For years, I’d dreamed of climbing up its wild couloir, ice climbing up the hanging glacial ice and then skiing the snowfield perched above. Yet this last time I knew that I didn’t have the skills or risk tolerance to get myself to the top of this one. So, I wondered who and when?

But first, let’s discuss the what. The “what” is a Chamonix worthy ski line, miles away from any ski resort, extremely deep in the Canadian wilderness. A hanging face, rimmed by granite walls, inaccessible except by climbing right up it. It sits deep in the Monashee range, the silent sister of the Selkirks. The Monashees are rarely spoken of because they’re hard to access. They are around 170 (260 km) miles long and mostly bordered by a lake approach or miles of logging roads. I’ve journeyed through this entire range and there is no line like this anywhere else. It is likely the most radical ski line imaginable in this range. For years, it sat there, tantalizing and terrifying, waiting for the right conditions and team. 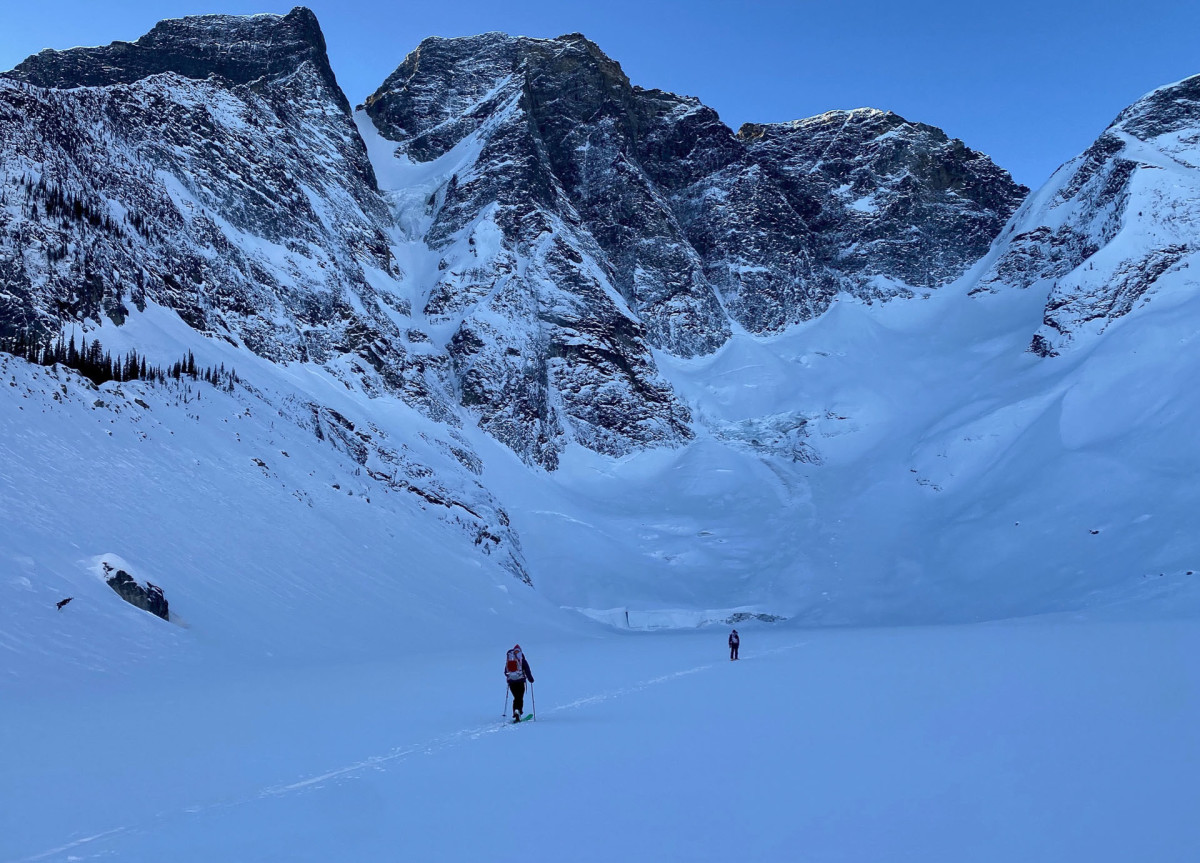 It doesn’t come as much of a surprise when it turned out to be Christina Lustenberger, Andrew McNab, and their secret weapon Brette Harrington. The skill, psyche and determination of this powerful team added greatly to their chances. Andrew McNab is a Revelstoke local and ski guide, who over the years has ticked off most of the wild lines around Revelstoke. Lusti, former olympian ski racer, turned ski mountaineer has been pushing the limits of what is skiable for many years now. Last year these two skied an incredible line off Mount MacDonald, one of the last great unskied lines in Rogers Pass. Their skills and drive are turning them into quite a dynamic duo.

Though both had the skills for the descent of this line, it was the ascent that would require some serious climbing. On a previous attempt Andrew was turned around by the overhanging glacial ice. This is why Brette Harrington was essential to this success. Brette’s mountaineering feats are impressive with solo ascents in Patagonia and first ascents up wild faces all around the world. Calm and bubbly, her and Lusti have also become a mountaineering/skiing team where they each lend their strengths to the other and are always out getting shit done.

The “when” is pretty easy, last week on Jan 21st Lusti and Brette went out for an attempt at this line. They snowmobiled in 17 miles, ski toured a few hours, and began the boot pack up the couloir. Fully equipped, they climbed through the first ice bulge and worked up towards the hanging glacial tongue. I can only imagine how intimidating this felt!! They climbed up and Lusti belayed Brette as she climbed up the millennium aged ice. As one pick went in, it settled the whole piece of ice. The whummff reverberated off the walls, and the duo decided to pull the plug and head out. 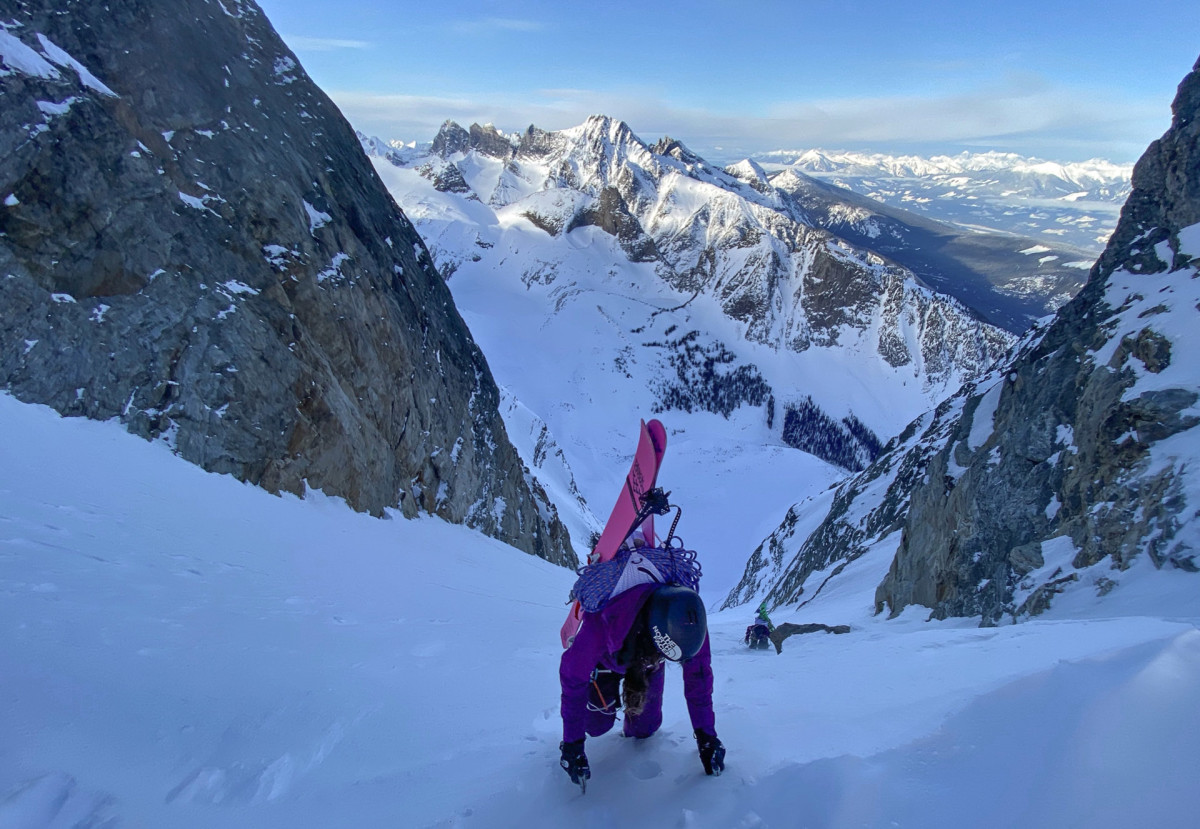 On Jan 23 the trio returned for another attempt. With more knowledge than before they made it swiftly to the glacial ice, and instead of a direct approach, Brette climbed left of the main ice on what was hoped to be more seasonal ice. 1 pitch of vertical ice, and then the second overhanging glacial bulge. Midway up Brette sunk her tool in and again the whole thing shifted, and a crack appeared near Lusti and McNab. This time it didn’t shake their commitment, and they continued upwards. With 600 feet of 55-50 degree snow hanging above them I can only imagine the mental fortitude needed to go upwards. No safety net, any stumble, fall or small slide would be death. Slamming ice axes into the stiff snow, the trio booted higher. The snow was settled and their boots stuffed securely into it. The hours of fear and wonder as they climbed up, and now the success of the top looked incredibly satisfying. I wonder how intimidating the descent must have felt, looking down between their boots as they kicked up this hanging face!! 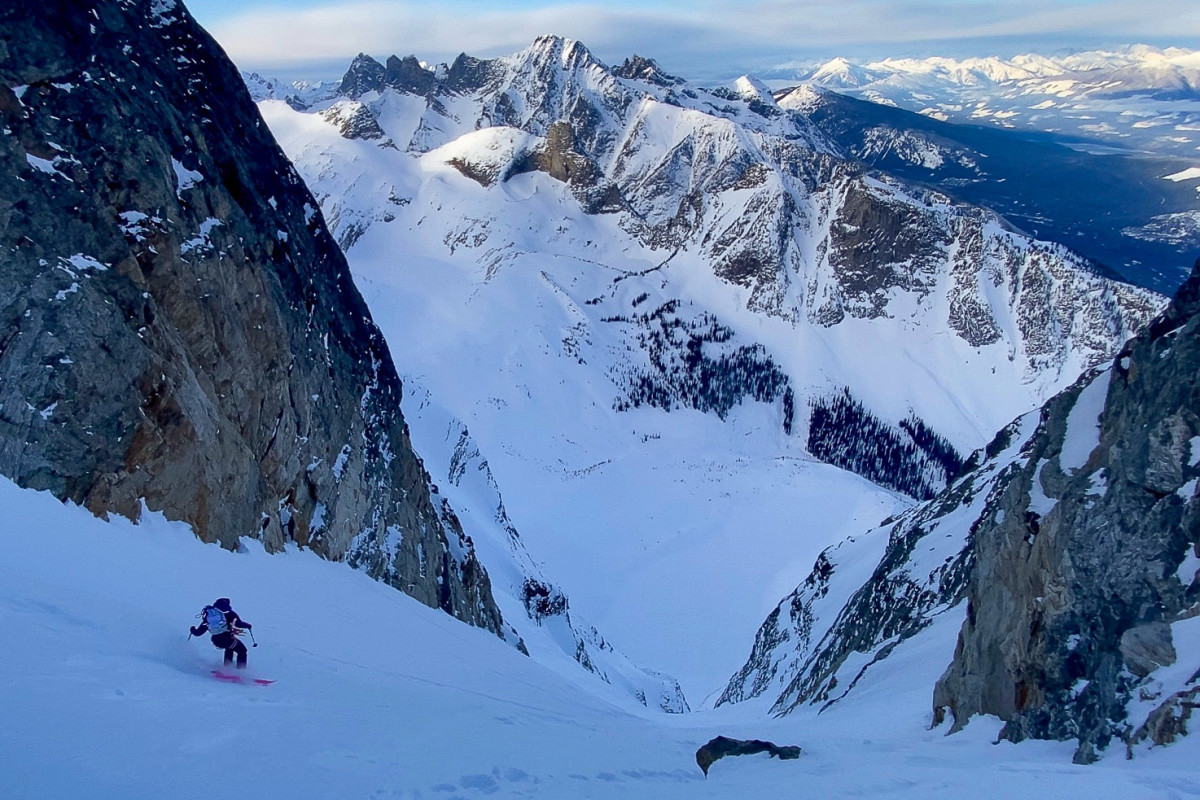 Lustenberger dropping into the Gold Card, named as such when McNab somehow dropped his credit card into the abyss during the ascent.

Bathed in the sun, they then had to get ready to descend. and by descend I mean ski in absolute control down 50-55 degree snow, with massive exposure. Lusti led off and found her happy place in the severity and engagement level needed. Brette was next as Andrew savored the moments with photos. They all controlled their turns, and made sure that any small slough moved away from themselves. Lusti set up an anchor 20 meters above the ice and they rappelled to the ice, then two more rappels, 60 and 40 m brought them back to their skis. Still the skiing was exposed and real, as they had one more rappel waiting. This anchor was waiting from their previous attempt so they moved quickly and were off the line as the evening set in. Howling with heartfelt happiness the trio skied away. Probably already dreaming about their next line.

It is inspiring to see this group send such a line in style. The progression continues and mountains are seen through different eyes with different strengths. I wonder which of the great un-skied lines will be next on this team’s radar. I have seen a few of them and cannot wait to hear the stories.