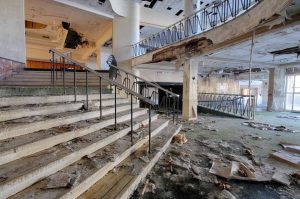 Inside The Nevele Grande Hotel. PC: Forgotten America via Facebook

In 2009, The Nevele Grande Hotel closed its doors for good. This extravagant resort that was located in Wawarsing, New York, reigned for 108 years before closing its hotel, ski hill, and golf course.

Opening in 1901, “Nevele” is “Eleven” spelt backwards. This is credited to the eleven 19 century school teachers who discovered a waterfall within the property. Additionally, the founder, Charles Slutsky had 11 children, which would have also contributed to the name of the resort. Located in the west of the Shawangunk Mountains and between 2 small lakes, the resort featured a ski resort, a ski chalet, 430 hotel rooms, an ice rink, an 18-hole golf course, an indoor pool, and an health club. 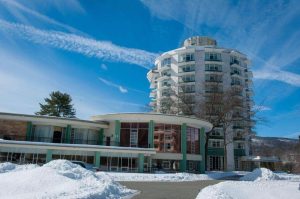 The exterior of The Nevele Grande Hotel. PC: Forgotten America via Facebook

Although the resort was originally named Nevele, in 1997 it was sold by the Slutsky family and merged with the adjacent resort, Fallsview Resort. After this merge, the name transformed to Nevele Grande Hotel. In 2006, the property was sold after “falling on hard times”. The Fallsview Resort eventually broke off from Nevele Grande and formed Honors Haven resort and Spa. For years following, the original Nevele property stayed open after the split. Unfortunately, the resort shut down abruptly after the Fourth of July weekend of 2009. The owners, Mitchell Wolff and Joel Hoffman, were struggling to pay taxes and were forced to close The Nevele Grande Hotel.

After an auction fell through in 2009, the hotel sat unused and deteriorating. As a last resort, Hoffman generated profit by selling composed material from the building. Fortunately, in May of 2012, Nevele Investors LLC announced that the resort would undergo a $500 million renovation to transform it back into a resort and casino. Unluckily, the state denied he proposal to allow gambling in the resort in 2014. Developers then proposed to turn the hotel into a mega sports complex. They planned for construction to begin in 2017. In September 2017, Nevele Investors LLC Announced the date of reopening to be in March of 2020. Later in March of 2019, developers announced that the necessary funding had not been secured and that they had no set dates for the project. Today, no refurbishment has taken place on the property. 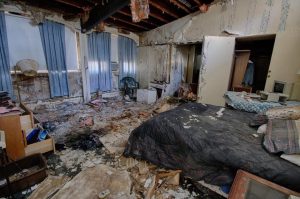 A room in the hotel. PC: Forgotten America via Facebook