Skier Seriously Injured After Avalanche Carried Him 600-Feet Over Rocks in Tuckerman Ravine, NH on Sunday 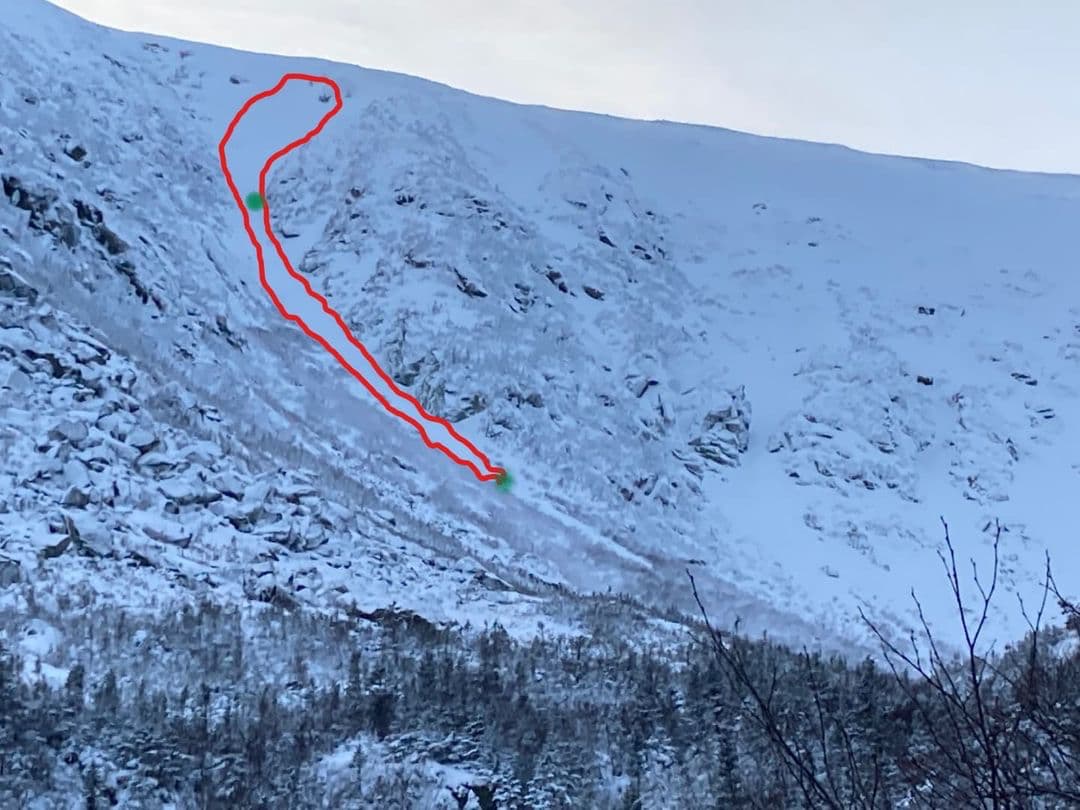 The avalanche in Tuckerman Ravine on Sunday seriously injured a skier. Credit: MWAC

The Mt Washington Avalanche Center reports that a slab avalanche in Left Gully in Tuckerman Ravine on Sunday carried a skier 600-feet downhill, hitting several rocks, and causing ‘bad breaks’. The solo skier was traveling uphill at the time.

The avalanche, which had a 20″ crown at its thickest, was large enough to bury, injure, or kill a person and encompassed a medium-sized portion of the whole slide path.

Full details, in lieu of an official report, below:

Yesterday, on the afternoon of December 5, 2021, a solo skier was traveling up Left Gully when a slab avalanche from above struck them. The skier was carried downhill by the avalanche, hitting several rocks and coming to rest above the debris field, traveling downslope nearly 600 feet. The skier sustained severe injuries. A rescue effort was immediately undertaken by several bystanders, a Harvard cabin caretaker, and Forest Service Snow Rangers. A crown line photo reveals a slab of approximately 20 inches at its thickest spot, originating on the uppermost southeast facing aspect. The avalanche was large enough to bury, injure, or kill a person and encompassed a medium-sized portion of the whole slide path.

Understand that we are not issuing a daily avalanche hazard rating yet. The skiing on the east side of Mount Washington has many variables and wind is a fairly consistent driving force behind the avalanche forecast. If we have new snow and wind you are likely to find slabs of drifted snow that can act unstable, resulting in an avalanche. The current terrain options are very confining and committing to a point where there’s usually someone above or below you at any given time. It can be a good thing that there are plenty of hands to contribute to a rescue, but awareness of those around you should also steer your decision making.

A detailed accident report will follow this posting once it is finalized. In the meantime:

❗Please read and subscribe to our forecasts, which will become more and more regular over the coming weeks.

❗Links to all our resources are located in our Bio page.

❗Seek out education, guiding, and training opportunities for this season to help recognize hazard and manage risk.

❗Look out for one another. There is a long winter ahead with lots of snow to come. Slow down, think through your decisions, and ask yourself “what is my vulnerability? how exposed am I or my partners? What is the consequence?”