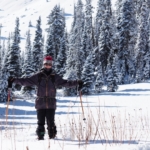 Spyder has been a recognizable name in the wide world of skiing for quite sometime. The brand has had its hand in movie projects, competitions, and clothed athletes for more that 5 decades. Founded in the late 1970s, the company has had plenty of time to focus and refine its designs. Spyder was born out of downhill racing, being one of the staple providers for racing suits across the world. They’ve made good on their commitment to create clothing designed and made by racers, for racers. However, it’s never too late to teach an old dog new tricks.

As of late, the industry icon has gone into a phase of redefining what they’re known for, and branching out into the many different disciplines skiing has to offer. Previously, Spyder has been primarily known for outfitting racers in competition gear, (such as race suits), and giving your day to day resort rippers a trusted, durable choice of outerwear. But all that has been turned around the past few years, as they seem to be moving into markets they hadn’t had much stake in before, primarily the world of freestyle skiing. By signing world class athletes like Bobby Brown, Giulia Tanno, and Alex Hall, Spyder has catapulted their Freeski line into the forefront of the scene. Stylish, technical, and born from a lifetime of experience, there’s plenty to love about what’s in store for the black widow brand.

One of those exciting new endeavors is that Spyder has been chosen to create the outerwear for the whole U.S. Ski team; moguls, ariels, freestyle, and alpine. Each discipline is getting outfitted with their own unique selection of gear, that has been specifically designed for what each competition calls for. The whole collection has been done in tandem with Eric Haze, the iconic street artist and designer based out of Brooklyn, New York, (or New Yahk, as Andy Perry would say). Take a look at the new collection, and what each piece has to offer. Switch and swap, the Freeski team can pick and choose their favorites Over their signature suits, the Alpine team will have plenty of style available The organized chaos of moguls, translated into a uniform. Poetry in motion right there Onesies are back, baby! Stylish and fluid